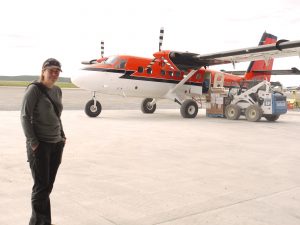 Christina Robinson started her archaeological career in the UK where she graduated from Bournemouth University in 2000. She then took to the world of commercial archaeology in the UK where she spent 11 years honing her skills as both a Field and Geomatics Supervisor. Christina’s move to Canada saw her arrive in St. John’s, Newfoundland and Labrador, where she undertook her MA at Memorial University of Newfoundland under Dr. Priscilla Renouf. After her MA, Christina became the project manager for the Coastal Archaeological Resource Risk Assessment (CARRA) project, which looked at sites at risk from sea-level rise and the ways in which heritage managers are dealing with this complex issue. It was through this project that Christina first became aware of Dr. Peter Dawson’s work, specifically the terrestrial laser scanning at Fort Conger, NU. In 2016 Christina joined Dr. Dawson as a PhD. candidate at the University of Calgary where she is employing terrestrial laser scanning as a monitoring tool for the physical changes at a number of heritage sites in Alberta and the Northwest Territories.